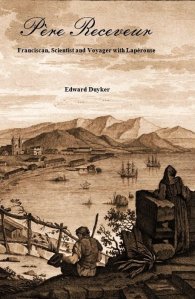 Ed Duyker’s booklet on Receveur was launched tonight at the Laperouse Museum.  Link to SBS Radio interview with Ed Duyker (in English, 21.2.2011)

Autographed copies of the booklet are available.

Edward Duyker OAM, FAHA, is the eldest of eight children born in Melbourne to a Dutch father and a Mauritian mother in 1955. He graduated from La Trobe University in 1977 with
a BA (Hons.) and received his Ph.D. from the University of Melbourne in 1981. He worked as an intelligence officer (South Asia/Middle East) with the Department of Defence in

Canberra until 1983 and was briefly a Teaching Fellow at Griffith University in Brisbane. In 1984 he settled in Sydney as an independent historian. Between 1996 and 2002 he also served as the Honorary Consul of the Republic of Mauritius in New South Wales. He has published seventeen books, many dealing with early Australian coastal exploration and the natural sciences. These include An Officer of the Blue (1994), a biography of Marc-Joseph Marion Dufresne (the first explorer after Tasman to reach Van Diemen’s Land); Nature’s Argonaut (1998), a biography of Daniel Solander the Swedish naturalist on the Endeavour, which was shortlisted for the New South Wales Premier’s General History Prize in 1999; Citizen Labillardière (2003), a biography of the naturalist Jacques-Julien Houtou de Labillardière, which won the New South Wales Premier’s General History Prize in 2004; and François Péron (2006), a biography of the controversial zoologist of Nicolas Baudin’s expedition to Australian waters, which won the Frank Broeze Maritime History Prize in 2007. In 2001, with his mother, Maryse Duyker, he also published the first English translation of the journal of the French explorer Bruny d’Entrecasteaux. In 2007 Edward Duyker was elected a Fellow of the Australian Academy of the Humanities. He is an Adjunct Professor in the School of Arts and Sciences at the Australian Catholic University and an Honorary Senior Lecturer, in the Department of French Studies, School of Languages and Cultures, at the University of Sydney.