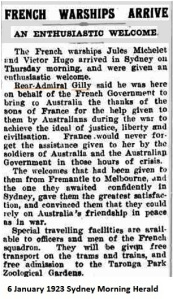 He was appointed Midshipman on 5 October 1887 and was promoted Sub‑Lieutenant on 4 January 1887, being based in Lorient.  In early 1892, he was posted to the battleship MARCEAU, part of the Western Mediterranean and Levant Squadron, and became a torpedo specialist. Two years later, in 1894, he became second‑in‑command of the torpedo boat LANCIER, part of the Northern Squadron.  He was promoted Lieutenant on 25 April 1896. In January 1897, he became second‑in‑command of the cruiser ECLAIREUR, part of the Far Eastern Naval Division. Two years later, in 1899, he was posted back to Lorient. In January 1900, he became an officer-student on board the gunnery school, COURONNE, following which he qualified as a gunnery specialist. The following year, on board the same ship, he commanded the section chiefs’ squad.

On 1 July 1908, he was on the staff of the 3rd Section (Operations) of the Naval General Staff. He was promoted Commander on 29 November 1910 and later served in the battleship PATRIE, as assistant to the chief of staff, for gunnery, of the Second Squadron. On 1 November 1913, he was appointed commander of the sloop CHAMOIS, at the School for Pilots at Toulon. He was promoted Captain on 23 March 1916. He was awarded the Officier of the Légion d’Honneur as well as the Croix de guerre.

He commanded the Navy at Saint-Nazaire from 15 July 1916 until he was appointed to command the battleship JEAN-BART, part of the 2nd Battleship Division of the Mediterranean Squadron on 1 January 1921. He was promoted Rear-Admiral on 12 November 1921, and the following year was appointed to command the flying squadron of the Atlantic Fleet, flying his flag in the cruiser VICTOR-HUGO.

He was advanced to commandeur of the Légion d’Honneur in 1923, finally becoming grand officier.