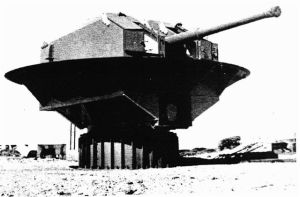 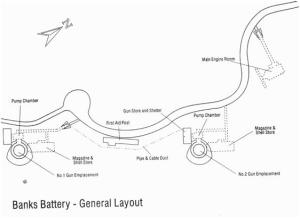 During World War II the servicemen and women stationed at the Cape Banks and Henry Head Batteries ‘stood and waited’ in defence of Botany Bay.  In his excellent book “We Stood and Waited” (ISBN 0646045997) Brigadier Ken Fullford describes Sydney’s Anti-Ship Defences from 1939-1945.  At Cape Banks the battery armaments consisted of 2 x 9.2 inch BL Mark 10 guns on Mark 7 mountings for Counter-bombardment and Close Defence.  These guns had a maximum range of 26,400 metres.    At Henry Head there were 2 x QF 18 pounder Mark 2 field guns, Anti-Motor Torpedo Boat and Close Defence capabilities, with a range of 9,140 metres, providing coverage across the entrance to Botany Bay.   Banks Batteries, like North Head,  had a 360 degree arc of fire.  (Images – QF 5.25 gun at Cape Banks & Layout of Cape Banks)

One of the more pleasant occasional duties that fell my way while posted at Henry Battery was to relieve the Section Commander at Bare Island for a few days.  The Bare Island Section was to say the least rather a quaint military organisation, one officer, a sergeant, two bombardiers and about ten gunners.  Their main armament comprised two 3 pounder Hotchkiss QF guns which I understand had come from the RAN.  I suspect from their age they may well have beeen in service with the Colonial Navies before the turn of the century.  They were rifled but the years and rust had taken its toll and somewhat smoothed the bore.  The ammunition however was bright and shiny.  The other equipment was quite rudimentary – a telephone and a Hall beach light.  I don’t recall any range finding arrangements.

The charm of Bare Island lay in the barracks and the fortifications and the dozen or so old war veterans in residence.  Sometime between the wars the barracks had been set up as a war veterans’ home.  After a night’s duty and completing the dawn “stand-to” there was nothing more pleasant than to sit in the sun with one or two of the old gentlemen and hear their tales of days past.  To add to the pleasure would be a swim at Congwong Bay en route to Henry Head.

Bare Island must be counted as a gem of colonial military architecture.  Importantly, it was established to control the entrance to Botany Bay in the 1880s.  It had quite a formidable armament – two RML 9 inch 12 ton guns and two RML 80 pounder guns mounted en barbette, together with an impressive RML 10 inch 18 ton mounted in an armoured casemate.  The Fort in those far off days also boasted two 5 barrel 0.45 inch Nordenfelt machine guns on field mountings.  I didn’t see where they were kept but imagine they were housed on the mainland.  There was only one gun of the old armament visible – a 9 inch RML piece lying somewhat forlornly by the causeway inscribed “struck off charge 1923”.  The gun had apparently graced one of the emplacements which had been modified to receive a BL 6 inch Mark 5 gun on a disappearing (hydro-pneumatic) mounting which was emplaced in the late 1890s, about the time the Henry Head Battery was established with two similar guns.  My interest was taken by one of the veterans telling of the 10 inch gun in the armoured casemate.  He said they couldn’t get it out and they wanted the space for a billiard room for the veterans.  the solution was to excavate the rock floor under the gun and lower it;  cement it over, and install the billard table above it.  On inspecting the casemate there was no sign of the gun but the window occupying the embrasure took my eye, as it is not often one sees a small casement window with floral curtains fitted into a piece of15 inch armoured plate.  Apart from the four major emplacements on the ridge of the small island there were a couple of command posts and cut into the rock on the landward side, a rather elegant barracks to accommodate perhaps about 50 troops.  The barracks were built of sandstone, two storeys with verandahs, barracks rooms, NCO and officers quarters, orderly room, mess, kitchen and storerooms, all complete and operating and with direct access to the magazines and emplacements.  For local defence there was a loopholed wall connecting with the cliffs on either flank.  As for the soldiers of Bare Section, they seemed to be quite well catered for in this pleasant seaside barracks.  They tended the venerable 3 pounders mounted on the glacis in front of the RML 10 inch casemate.  It was really quite primitive at that time as the guns were simply mounted in the open on their cone mountings with no emplacements or protection.  Perhaps the refinements came later.  They were a happy crew who carried out their duties and drills to everyone’s satisfaction.  No doubt they kept the Japanese from Botany Bay, certainly they were much appreciated by the old veterans.