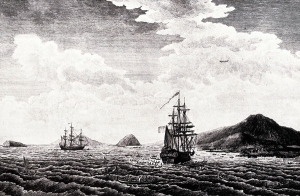 After Easter Island Laperouse sailed onto Hawaii (then known as the Sandwich Islands after Lord Sandwich) where he became the first European to set foot on the island of Maui.

Although the French are the first to have stepped onto the island of Mowee in recent times, I did not take possession of it in the King’s name.  This European practice is too utterly ridiculous, and philosophers must reflect with some sadness that, because one has muskets and canons, one looks upon 60000 inhabitants as worth nothing, ignoring their rights over a land where for centuries their ancestors have been buried, which they have watered with their sweat, and whose fruits they pick to bring them as offerings to the so-called new landlords.  It is fortunate for these people that they have been discovered in an age when religion is no longer a pretext for violence and greed.  Modern navigators have no other purpose when they describe the customs of newly discovered people than to complete the story of mankind. Their navigation must round off our knowledge of the globe, and the enlightenment which they try to spread has no other aim than to increase the happiness of the islanders they meet, as they add to their means of subsistence by introducing in the different islands bulls, cows, goats, ewes, rams, etc. They have also planted trees and sowed seeds from every country, and brought iron tools which should enable their skills to make very rapid progress.  We would have felt ourselves well regarded for the great hardships this campaign has caused us if we had succeeded in eradicating the practice of human sacrifices that is common among most of the South Sea islanders.

..  On 1 June at 6p.m. we were away from all the islands…A matter worth recording is that the same shoal travelled 1500 Ls with our frigates, that several bonitos which had been wounded by our small harpoons bore the scars on their backs, a form of identification we could not mistake, and thus we recognised every day the same fish we had seen the day before.”