Thursday evening October 27, 2016 over a glass of French Champagne, Nicole Forrest Green President of the Friends of the Lapérouse Museum and Committee Members Ted Hayes and Betty de la Torre, Carol and Charles Abela, Lynda Newman, Carole Roussel, and special Guests Ruth Doyle, Gail Tring, Ivan and Barbara Barko, all welcomed with interest and pride a new addition to the Museum’s collection Chart of New Caledonia (a numbered reproduction) drawn by French hydrographer Charles Francois Beautemps-Beaupré during the expedition in the Pacific of Rear Admiral Bruni d’Entrecasteaux (1791-93). Generously donated by Captain JJ Doyle AM, FAIN, RAN (Ret’d) the evening was enhanced by the presence of Captain (FN) Yann Marboeuf Defence Attaché to the French Embassy in Canberra, and representing

Captain Yann Marboeuf spoke of the bridge that the Lapérouse Museum in Sydney provided linking France and Australia; in the presence of his homologue Captain Tony Rayner RAN, he discussed the strong ties France and Australia had known since the earliest days of European settlement in Australia (1788) and currently in 2016, with the announcement in April this year of a substantial Australian Government Maritime Contract, that would further cement the two nations in the field of Naval affairs.

Ingleton entered the Australian Naval College in 1922. On completing his training he joined the Hydrographic Branch of the Royal Australian Navy, but left in the mid 1930s. At the outbreak of WWII he joined the Australian Navy’s Hydrographic Office as a civilian – a Professional Officer – and did not retire until the 1970’s. He drew the first chart in the Australian Chart Series and designed the official crest of the RAN Hydrographic Organisation. Ingleton’s magnum opus was the book Flinders, Navigator and Chartmaker which comprised around ten volumes. He had around 250,000 charts in his complete collection of catalogues housed primarily in a private annex next his house on ‘the Park’ at Parramatta, NSW.

Our President, Nicole thanked Captain Doyle and his wife Ruth for their interest in, support and generosity for the Lapérouse Museum and Nicole also relayed a message from the Museum’s curator Elizabeth Broomhead who sent her apologies for the ceremony but best wishes for a successful evening and sincerest thanks to Captain Doyle for his contribution. The evening concluded with dinner at Danny’s restaurant La Pérouse. 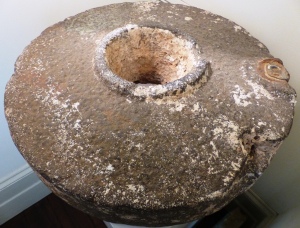 Millstone from L’Astrolabe, Stone, Retrieved from the shipwreck of L’Astrolabe in Vanikoro by Reece Discombe, 1958.  Weighing approximately 80 kilograms, this stone is the bottom half of the mill which was used for grinding grain to make bread.  The wheel was driven by a windmill on the stern of the boat as the ship sailed.  An iron peg engaged the windmill’s driving mechanism, the rusted remains of which can still be seen on the outside of the wheel.   Donanted by Reece Discombe, 1993.  Acc No. 93.2

L’Astrolabe was under the command of Langle.  In addition to fresh drinking water………………..”another of Langle’s concerns was a workable windmill to provide the flour needed daily for the crews.  Flour perished quickly in the hold and it was soon attacked by rats;  and when the French called at ports run by Europeans, they expected to buy mostly wheat and other grain, and not much flour.   Grinding wheat was a a slow and cumbersome task, difficult to carry out at all when the weather was bad.  Langle saw to the installation of windmills on the poop-deck of each ship. (from Journal of La Perouse trans. John Dunmore, Vol 1:xcviii).

The women are largely employed in household tasks, looking after their children, and roasting and crushing the grain, a very slow, laborious task because their only method is crushing it on a stone with a roller, more or less as is done with chocolate in Europe.  Mr de Langle who witnessed this operation gave his mill to the missionaries, and it would be difficult to render them a greater service;  four women will now do the work of a hundred, and there will be time left to spin the wool of their flocks and manufacture some rough cloth;  but until now the religious, more concerned with the interests of Heaven than with temporal matters, have been very neglectful of the need to introduce the more common crafts;  they are so austere in respect of themselves that they not have a single room with a fireplace even though the winter is quite severe, and the greatest saints have not led a more edifying life.  (from Journal of La Perouse trans. John Dunmore, Vol 1:182)