Today marks the 233rd anniversary of the death of Fr Receveur, Scientist and Franciscan Priest on the Laperouse Expedition. Masses have been held over the past centuries with this the first year since 1988 that it has not been held. 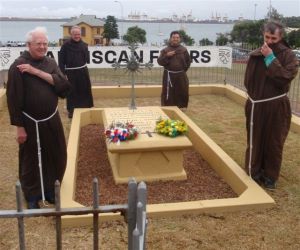 2009 Mass marking the 800th Anniversary of the Franciscan Order

Trish Ryan, conductor for many years at her last Mass in 2015. 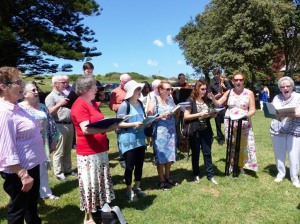 Trish with Choir and Musicians 2015 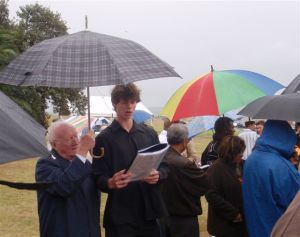 Madeleine Berti with musicians Henry, Will and Tom Peters 2013 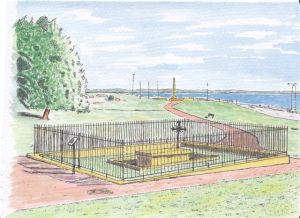 Original Tree Trunk in the Museum before it was returned to Paris in 2008.

Pilgrims from Townsville in 2009 hosted by Fr Paul Ghanem. 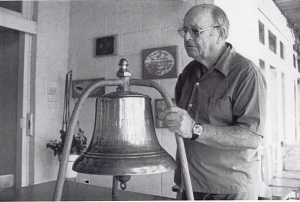 At the unveiling of the replica of the Altar Stone, 2012. The original was recovered in three pieces from the wreck of La Boussole in Vanikoro in 1964 by Reece Discombe and the Association Salomon of Noumea. The pieces were sent to Sydney by their respective custodians to be united and placed on exhibition for the opening of the Museum in 1988.

Mass at the grave in 1933, taken by well-known photographer Sam Hood. 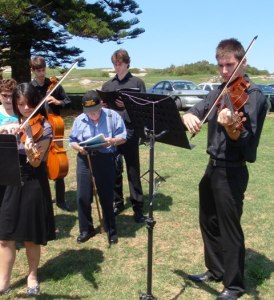 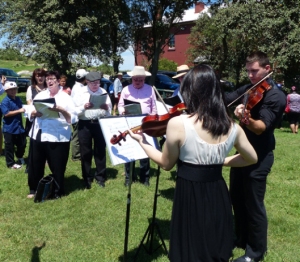 Latin service 2016 which is held before the St Andrews service by the Society of St. Pius X.

Frenchman”s Beach:  On Monday 21 February, 1876, a submarine cable was opened between Australia and New Zealand. The cable can be seen coming from the stern of the C.S. Hibernia.

Randwick City Council, on behalf of its residents/ratepayers, are developing a Collections Policy for the La Perouse Museum (leased from National Parks for 21 years beginning in 2017 with an option of a further 21 years). Residents/ratepayers and others interested parties are asked to ‘HAVE A SAY’. The opportunity to provide feedback closes 17th November 2020. Send your comments headed “La Perouse Collection Policy” to the General Manager by email council@randwick.nsw.gov.au(External link or by post to Randwick City Council, 30 Frances Street, Randwick NSW 2031.

This is an example of ‘your rates at work’ so also speak to local councillors – contact details. Discussion of this document by councillors, at Council meeting 29th September 2020, can be heard at 3:02:05 – 3:16:20 at this link   There is no discussion of projected cost to ratepayers.

Note that there is no list of items in the policy document to view, however items recorded are listed at this  e-hive link. Note that there are no items listed under telecommunications, only a few natural science items including a pin and a fox skin, and no details as to the value (historical/monetary). There are some items listed in the menu on this site under Treasures of the Collection eg. the Winch Tapestry, the Mill Stone, the replica of the Tree Stump, the replica of the Altar Stone, the bronze statue presented by Gough Whitlam which provide greater details.  The collection to date, including the Snake Show history(displayed in a dedicated room) , has been the result of sponsorships and donations eg. Reece Discombe for items from the Laperouse wrecks.

Based on national museum standards, the policy outlines the museums key collecting focus and collections management.

Background
The Policy has been developed by lead consultant Margaret Birtley (former Head of Museums Australia) in partnership with the Curator La Perouse Museum, and funded through a grant from the Australian National Maritime Museum.

The policy has also been developed through consultation with key stakeholders including the National Parks and Wildlife Service (NSW), the Friends of the Laperouse Museum, the La Perouse Local Aboriginal Land Council and the La Perouse Museum and Headland Trust.”

Other key stakeholders not mentioned include those furthering knowledge of communications history eg. The Telstra Museum  The Cable Station was built to house equipment and staff providing the first communications link between New Zealand and Australia and for New Zealand the first link with the rest of the world. There is also a local tourism tradition of snake shows, eg. Cann Family

“We welcome community feedback on the Policy as we continue to develop the Museum as a valued cultural asset for our growing audiences.

To have your say:

The Collection Policy is also available in hard copy at all Randwick City Libraries and at the Customer Service Centre, 30 Frances Street, Randwick.

The Star Drive-in (4 Wassell Street Matraville)  opened in August 1958 and operated until 8th August 1984 when it closed for the last time because it was no longer profitable. No fanfare greeted the last screening and only nine cars were there to view the last film screened, The Exterminator.

Review and photographs from the movie.

Review by Ned Manning who starred as the character ‘Crabs’

35 split day/nights of shooting in and around Sydney’s abandoned Matraville Drive In was a glorious experience I will never forget. The design of the Star Drive In by Larry Eastwood and Nick McCallum is nothing short of genius, beautifully lensed by Paul Murphy. This 1985 film demonstrates the high professional standard all departments of the Australian Film Industry had reached in the 15 years of its renaissance. Stunt co-ordinator Guy Norris performed the record breaking climactic truck jump stunt, and earned himself a well deserved international career.
My most bizarre memory of the shoot occurred when, at 3 am, a car full of drunken hoons, whooping and hollering, their testosterone stimulated by sounds of motorized mayhem, skidded round the entry barriers and roared into the drive in at high speed, perhaps hoping to join in the fray. We were about to do some gunfight scenes, so there were a couple of M 16s loaded with blanks on set. Someone – who shall remain nameless (!) – fired a burst in their direction, prompting a fast U turn and exit. I think they got their desired adrenalin rush. Perhaps they needed a change of underwear anyway. Subsequently, a European resident of a neighboring Matraville street took out a writ in the New South Wales Supreme Court to shut down the film because the nightly sounds of gunfire and explosions were giving him World War Two flashbacks. Indeed, gunfire at 3 am is grounds for complaint. ( Personally I enjoy that sort of thing, but I guess it’s not for everybody.) Co-producer Damien Parer handled this potential disaster with great expertise. He hired a barrister ( attorney) and headed to court to request the right to discharge firearms until midnight. But when the complainant’s counsel stated that his client was a decorated war hero, it looked like we were sunk. Then the judge asked what the decoration was. “ The Iron Cross “ was the answer. It is said the judge’s face hardened. We were allowed our requested firearms curfew. We finished those scenes in a couple of nights. But it was a lesson to me to be more sensitive to environmental impact on the civilian population. “

NOTE:  This article was published in 2012 and $quoted may have changed since then, but not easy to check given the opaque nature of Crown Lands website. 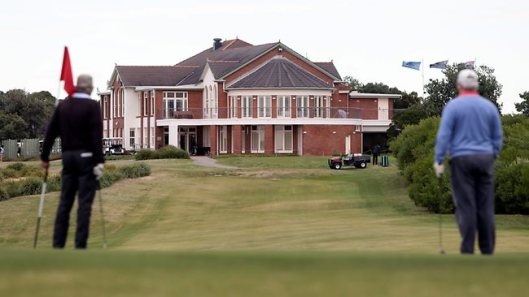 The contrast between the Lane Cove golf course on Sydney’s North Shore and the giant NSW Golf Club in La Perouse could not be more stark. One pays about $300,000 in rent to the local council. The other pays $40,000 to the Lands Department…. And when it comes to private Sydney clubs, there are perhaps few more aristocratic than NSW Golf Club Company Limited, set on 59 hectares of undulating hills that hug magnificent views along Sydney’s shore. With a 10- to 14-year waiting list to join, anyone who wants to take a swing at La Perouse generally has to be invited by one of only about 1000 members. Considering it costs almost $10,000 a person to join, and a further $2381 in annual membership fees, the rent paid to taxpayers represents the income from less than four new members.

IT’S one of the country’s most prestigious courses but apparently the NSW Golf Club isn’t worth a cent.   Brenden Hills, The Sunday Telegraph, 24 June 2012

Despite boasting a $32 million championship golf course and first-class entertainment and practice facilities, the Land and Environment Court has ruled the prime La Perouse land is worthless.

While it was valued at just over $6 million three years ago, the club’s lawyers last week convinced Acting Justice David Lloyd it was worth nothing in its bitter legal battle with the NSW Valuer General.
The decision will see the renowned club’s Randwick Council rates bill slashed by 97 per cent, dropping from $36,000 a year to less than $1000 — far less than the amount paid by furious neighbouring homeowners.

With sweeping views of Botany Bay, the exclusive club — ranked second-best in Australia and 34th in the world — has a 10-year waiting list for membership that counts Ricky Ponting and Greg Norman among its numbers.

In documents filed to the court, the club admitted the cost of building such a course from scratch would be about $32 million, not to mention its idyllic surroundings.

But general manager David Burton told the court the club was far from profitable.

Despite raking in almost $800,000 in corporate and new membership fees last year, he said the club turned a net profit of just $331,786 — and that even that “reverted to a loss when funds were allocated to a reserve for future course maintenance”.

Justice Lloyd agreed and, in making his decision, accepted that a clause in the lease which allowed the government to evict the club with three months notice rendered the land value worthless. “The price which (a) hypothetical purchaser would be prepared to pay would be nil,” he said.

The club’s acting general manager Warren Begg would not be drawn on whether it would recoup rates paid to the council since July 2009, but its barrister Peter McEwen SC admitted the decision could be used as a legal precedent to argue against future valuations and that it would have “ramifications throughout the state”.

He said the government would need to close the legal loophole if they wanted to prevent other clubs from following suit and mounting the same argument to reduce their rates. “The government will need to change the law or review their leases,” he said.

The decision has outraged neighbouring ratepayers, who said the club — and its high-profile members — had left them to foot the bill for the council’s services.

The council calculates its rates based on land value and a “nil value” means the club only has to pay $990 — the minimum amount possible by a commercial tennant.

In comparison, John London, who has lived near the course for more than half a century, pays $1156 annually in rates for his property with a land value of $486,000.

“They’re a pretty exclusive club and have plenty of well-heeled members so it doesn’t seem right that they’re paying less in rates than me,” the 77-year-old said.

There’s a flurry of activity around La Perouse.  Not only are there more visitors than normal during weekdays in Autumn but there is also construction work for the expanded playground on the foreshore and what looks to be preparation for the wharf proposed 4 years ago.

Survey of the La Perouse Loop perhaps for wharf