How to throw a Boomerang with Uncle Laddie from ABC Open Sth Coast & Tablelands on Vimeo.

(L: Laddie Timbery in the Museum and R: Marjorie Timbery at the opening in 1988.  She was also a regular at the La Perouse Loop where a monument to her stands today. 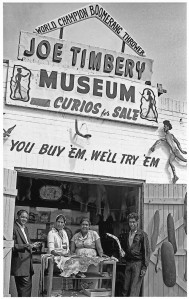 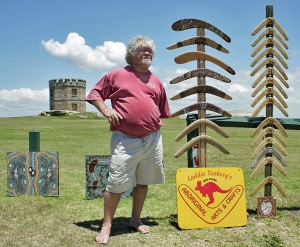 Joe Timbery (1912-1978)was famous for making boomerangs and other Indigenous artefacts, which were either painted or engraved with motifs such as Australian flora and fauna, along with iconic images such as the Harbour Bridge. Such works reflect links to land and traditional cultural practices, along with changing circumstances within Aboriginal communities brought about by European invasion.

From the mid to late 1800s, Aboriginal people created artworks such as boomerangs, shields and clubs which were decorated with engravings or paintings. These were sold to tourists who were coming to the beachside area in increasing numbers. In addition sellers would take their wares to sell at market places and other tourist areas within Sydney. Aboriginal women from La Perouse became known for their shellwork, decorating boxes, boomerangs and other items with shells collected at La Perouse and nearby areas along the NSW coastline. Joe’s grandmother Emma (1842-1916), known as ‘Queen’ or ‘Granny’ Timbery, became an accomplished and well known shellworker, selling her works to tourists as well as exhibiting in the Royal Easter Show.

Similarly, Joe entered this market and became famous for his engraved and painted boomerangs, along with his excellence in boomerang throwing. Joe offered lessons in boomerang throwing, including the rock group Abba, and taught at the Sydney Boomerang School. He demonstrated his skills near the Eiffel Tower in Paris and in 1954 presented his hand-made boomerangs to Queen Elizabeth II during her royal tour of Australia. Joe was also known for his storytelling, and was a keen writer of poetry.

(Courtesy of Museum of Applied Arts and Sciences)

Laddie Timbery who carried on the family tradition at the La Perouse Loop.  Laddie is based at the Jervis Bay Maritime Museum in Huskisson.