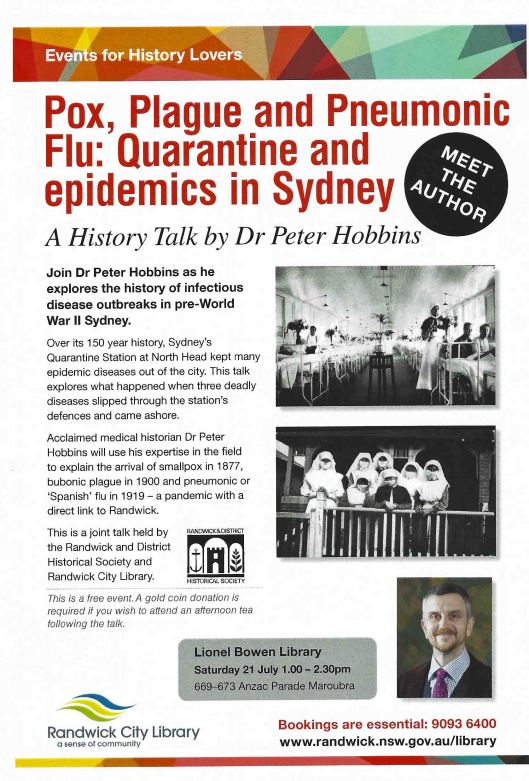 Posted by Admin | Filed under Uncategorized 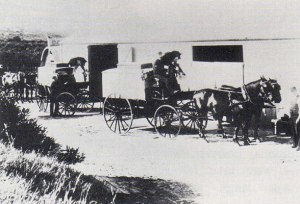 Prince Henry had its origins managing patients with infectious diseases such as Smallpox in 1881, Diptheria, Tuberculosis and Scarlet Fever and in 1890, Leprosy. In 1900 there were 303 cases of Bubonic plague claiming 103 lives with a further outbreak folowing in 1921. But the hospital was stretched in 1919 when the 1918 Spanish Flu/Swine Flu pandemic was at its height. Prince Henry closed its doors a few years ago and its services were transferred to Prince of Wales in the heart of Randwick. How would Sydney now cope in a pandemic without facilties such as Prince Henry. (Photo- horse drawn ambulance)  Link to Timeline

On the anniversary of the outbreak of the 1918 Spanish Flu epidemic, the Daily Telegraph in the UK ran this article: 03 Nov 2008:

Flu epidemic anniversary: How would modern Britain cope with an influenza pandemic?

Ninety years ago this week, as the First World War was drawing to a fitful close, a dreadful epidemic swept across Britain.

“So many were ill that only the worst could be visited,” recalled a GP’s son from Lancashire. “People collapsed in their homes, in the streets and at work… All treatment was futile.”

The symptoms of the ‘Spanish’ influenza – so-called because Spain, as opposed to countries involved in the conflict, did not censor reports of the spreading plague – included a hacking cough, projectile nose bleeds, and a condition known as heliotrope cyanosis, a dark-blue discolouration caused by shortage of oxygen to the lungs. Unlike most strains, it did not just strike the very young and old but also the 20-40-year-old age group. Around 228,000 Britons perished, and worldwide, it killed at least 50 million – ten times as many as had died in the war.

Now, as the world faces the prospect of a new pandemic – mostly likely triggered by the bird flu virus H5N1 – the question has to be asked: how would Britain cope with a similar outbreak today? In the event of a repeat of 1918, the Department of Health calculates that a quarter of the UK population could fall sick over a fifteen-week period and 375,000 people could die. But the Armageddon scenario is that a new avian virus could have an even worse impact – resulting in more than 450,000 deaths.

One of the last Britons still living who remembers the’Spanish Lady,’ is Ada Darwin, a 98-year-old who lives in Chester. She was seven when influenza killed her younger brother and both her parents. “There were black horses with plumes made from ostrich feathers, then the gun carriage with my dad’s coffin covered with the union flag,” she recalls. “My mother’s coffin was in a big glass hearse with Noel’s coffin under the driver’s seat. My grandma told us my mother had gone to Jesus, but I said, ‘Jesus has got plenty of people, I want my mummy.’”

Darwin says her grandmother knew straight away that her mother, Jane, was going to die because of the ‘black patches’ (the cyanosis) on her face. Darwin’s brother Noel, aged 4, died three days later, followed two days after that by her father Frederick Berry, a volunteer in the Royal Army Medical Corps, who’d caught the flu while nursing soldiers at Salford Military Hospital.

With a quarter of the nation’s doctors and nurses away at the Front, neighbours or children became nursemaids. Local authorities ran short of coffins and gravediggers, leaving bodies lying unburied for as long as a fortnight. It often fell to young sons or daughters of victims to make the funeral arrangements. Bertram Copping, a grocer’s son from Islington, and one of the survivors whose recollections form an extraordinary archive at the Imperial War Museum that I was fortunate enough to draw on, was sent to select a coffin for his father. No one had told him how much he could spend ,so he plumped for the “cheapest but one.” On the day of the funeral, coffins were stacked ‘one on top of the other,’ waiting to be interred. “It was at that moment at the age of 10 that my boyhood ended,” he wrote.

In December 1918, The Times concluded: “Never since the Black Death has such a plague swept over the face of the world and never, perhaps, has a plague been more stoically accepted.” The worry is that today’s Britons would not be nearly so stoical – hence the urgent drafting of pandemic plans by the Department of Health.

On average, influenza pandemics occur every 20-40 years; the last one occurred in 1968 – so, as Britain’s Chief Medical Officer Sir Liam Donaldson says, it is a question of “when, not if.” So far, the government has stockpiled 14 million doses of the anti-flu drug oseltamvir ( known as Tamiflu) – enough to cover 25 per cent of the British population – and has put in place ‘sleeping contracts’ for the fast-track manufacture of 120 million further doses of flu vaccine, once World Health Organisation (WHO) scientists confirm that the flu virus has mutated into a potential pandemic form.

As soon as the WHO issues what is known as a Phase IV alert – meaning they have found clusters of the new strain spreading from person to person – the government will launch a major advertising campaign, warning people to stock up on foods, water and vital medicines. Once the first cases are reported in Britain, the Chief Medical Officer will go on TV to address the nation.

The key phrase will be ‘business as usual.’ The government’s biggest fear is the impact on the British economy. It believes that if people can be reassured about travelling to and from work then absenteeism can be kept to around 25 percent. But if people panic and stay at home, it could reach 50 per cent, severely affecting everything from food deliveries to telecommunications. “We are very conscious of the fact that the British economy is far more reliant on international trade than it was in 1918,” says Professor Lindsey Davies, national director of pandemic influenza preparedness. “Everything is much more interdependent.”

Prof Lindsey wants those who fall ill to stay at home and seek advice from a national flu hotline, to reduce the risk of the virus spreading. But what if people fail to do so? If a quarter of the British population were to fall ill – the same proportion as in 1918 – 15 million could swamp surgeries and hospitals. In theory, says the Royal College of General Practitioners, consultations would jump from an average of 30 per week per 100,000 patients to 5,000-10,000 – overwhelming the average primary care trust.

Similarly, should ten percent of the affected population develop complications such as pneumonia or a cyanosis-like illness, then 1.5 million people might need intensive care and ventilators. At present, England has 110,000 acute hospital beds and 1,800 intensive care beds.

Even in 1918, with a population inured to hardship through war, doctors’ surgeries were inundated and there was panic-buying at pharmacies. Such panic is even more likely today, with our higher expectations of the NHS. Moreover, when expectations are not met, community spirit quickly evaporates especially if politicians appear dithering or ineffective.

One idea being promoted by Prof Davies is to revive the volunteerism of 1918 – asking people to identify someone they would look out for in a pandemic – an initiative known as ‘Be a flu friend.’ Another is a ’tissue mission’ sponsored by Kleenex and the Women’s Institute to persuade people to use tissues to stifle coughs and sneezes. With news that Brisbane H3N2 – a strain that ravaged Australia last year with three times as many succumbing to flu as usual – is on its way to Britain, this winter could be as good a time as any to promote such campaigns.

‘Living With Enza: The Forgotten Story of Britain and the Great Flu Pandemic of 1918’ by Mark Honigsbaum (Macmillan Science) is available from Telegraph Bookshop for £16.99 + £1.25 p&p. 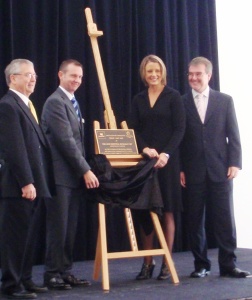 The Prince Henry Community Centre was officially dedicated today – from Landcom to Randwick City Council. (L-R: Landcom’s CEO Sean O’Toole, Mayor Bruce Notley-Smith, Planning Minister Kristina Keneally, Local Member and Minister for Roads Michael Daley). In his speech, the Mayor declared the centre “OUR KEY CULTURAL DESTINATION”. On Twitter, later in the day, Kristina Keneally said that Landcom had handed over $50 million in community assets, including the $5 million community centre. In the original Masterplan the Centre was to be twice the size and include tennis courts and library. Requests to ensure performance spaces with sgood acoustics were ignored.

The community is still waiting for the promised Medical Centre, shopping and other commercial services. Services such as these make communities sustainable, both ecologically and socially. The key players – State Government, Council, the developer, existing businesses and those interested – need to be brought together to discuss how the Village Vision contained in the Prince Henry Masterplan can be achieved. There was no shortage of ‘will’ to build a new helibase for the Westpac Helicopter. Even though the Government’s Health Department had already signalled big changes ahead in the delivery of such services, an Act of Parliament was brought in, National Park was excised and the Scouts turfed out, to ensure  Surf Life Saving was accommodated. Surely a similar effort can be put into getting the basic services outlined in the Prince Henry Masterplan.

The Land and Environment Court met at Prince Henry this morning with community members turning up to support Randwick Council’s fight to make Stockland stick to the agreed Masterplan.  Charles, Janice and Diane from the La Perouse Precinct Committee outlined the major concerns.  It had taken extensive consultation with the community to arrive at the Masterplan.  It is inappropriate to increase the height levels at the entry to the development and our need for retailing, services and healthcare was non-negotiable.    A resident from  Prince Henry supported these concerns and added that he had made his decision to buy into the development based on the Masterplan.  After taking evidence the Commissioner was taken on a tour of the site.

Photos L-R: the community gathering for the hearing;  in the ‘courtroom’; on tour;  looking at the entry; Sewing Room sculpture – situated on the site of the former Heritage listed Sewing Cottage which burnt down under the care of Landcom.  This is what is said about the Sewing Room in the Heritage Listing: “Sewing room, formerly Superintendent’s Cottage. A rusticated weatherboard former residence, built c 1915, with shingled sun hoods and fascia, timber verandah and balustrade and a later Marseilles tiled roof. There is a garage of similar date adjacent and a trellis survives, sheltering the rear entrance. ”  Link – Prince Henry Hospital    This is what is said on the sculpture – ”

This was the site of the sewing machine cottage, a non-discript(sic) little building where sewing of nurses uniforms and general mending of clothing took place in the late 1800s and early 1900s.