I look forward to watching the growth of this museum….

The Hon Mark Speakman MP NSW Minister for the Environment and Heritage when presenting his lecture entitled The wisdom of Lapérouse a Navigator of Exception on Wednesday evening.

The annual Heritage Festival walk on the Laperouse Expedition saw a crowd of 36 with some travelling from as far away as Canberra, the South Coast and Newcastle.  The walk around the monuments, led by Lynda Newnam, was followed by morning tea on the veranda of the Cable Station and a short tour of parts of the Laperouse collection. 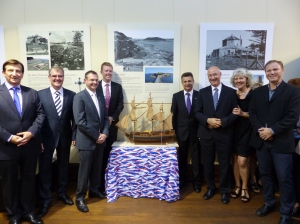 To celebrate Laperouse Day, the Mayor of Randwick, Cr Scott Nash, and the Consul-General of France, Monsieur Eric Berti unveiled the latest addition to the Laperouse Collection.  It is a model of la Boussole(Compass), the ship commanded by Captain Jean-François de Galaup, comte de Lapérouse.

La Boussole was originally a flûte (cargo ship) of 450 tons, named Portefaix (Stevedore). It was selected by the Minister of Marine, the Maréchal de Castries, on 6th March 1785 and then brought from Rochefort north to Brest, arriving on 13th May. It joined l’Autruche (Ostrich), later to be renamed l’Astrolabe, and then both ships were refitted for the scientific expedition commissioned by King Louis XVI.

English-made cooking stoves were replaced with traditional French galley stoves. Windmills were installed on the poop-deck of each ship for grinding wheat. Distilling machines, invented by Frenchman Pierre Poissonnier in 1763 to supply drinking water from sea water, were added. Both ships were decorated with wooden carvings of the French crest. Because it carried the commander of the expedition, la Boussole was provided with additional carvings of three fleurs-de-lys flanked by two cherubs at work with navigational instruments. The carvings were made at Brest in pine and lime-tree wood, and cost 332 livres 15 sols. Each ship carried five craft including a longboat, a Biscay boat and a yawl.

This model, at a scale of 1:70, is 92cm in length and took over 400 hours to produce. It was hand crafted by Le Village – Maquettes de bateaux in Madagascar using rosewood for the hull and ebony for the superstructure, masts, yards, pulleys and chain plates. Vegetable dyes and tea and coffee were used for the cotton sails.

This is a recent installment in a history series Au coeur de l’histoire on French commercial radio station Europe 1, run by Franck Ferrand, an excellent presenter. The title is La malédiction Lapérouse. It’s partly based on interviews with Dominique Lebrun, author of a book under the same title published in April 2012, and with Jean-Christophe Galipaud, whose earlier interview is already featured on our website.

Bernard Jimenez, Secrétaire, L’Association Lapérouse Albi, and his wife Françoise have been touring in the footsteps of Lapérouse (see their description of Tutuila).  Today they stopped off for a visit to the Museum and Monuments, hosted by the Friends.  (Photos:  viewing the Altar Stone; viewing the anchor with Professor Ivan Barko and Charles Abela).